The Revs released RHP Corey Walter & LHP Ian Thomas prior to Sunday’s game.  Walter is heading home to finish school this fall, and Thomas was coming off a shoulder injury that wiped out his last two seasons, and struggled to get built up as a starter.  The Revs have signed a pair of young RHPs who will make their debuts on this road trip in Ricky Schafer and Joe Jones.

Schafer is a 26-year-old from Mission Viejo, CA who began his pro career in the Pacific Association before pitching in the Can-Am League last season.  He has also established himself as one of the top starters in the Empire League the last two years, going a combined 13-2 with an ERA in the low 2.00s. Schafer will make his debut on Thursday night at Somerset.

Jones is a 6’5 righty from Cookeville, TN who has seen time in the American Association, Pacific Association, and Frontier League.  He’ll make his Atlantic League debut Friday night at New Britain.

Here are tonight’s game notes for the opener at Somerset, including lots of nuggets from Sunday’s 19-1 thrashing of the Bees: 7-30-19 at SOM 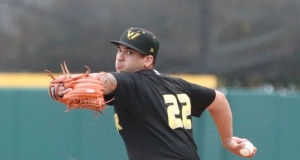 The Revs have added RHP Julio Eusebio to the bullpen in advance of tonight’s game at New Britain. Eusebio began the season in the Mexican League and spent four seasons in the Pirates system putting up terrific numbers from 2014-17 before some time in the American Association last year. More on Eusebio and the rest of the red-hot Revs in tonight’s game notes: 7-19-19 at NB

The York Revolution made a pair of roster moves today, releasing RHP Pat Young while adding OF Dario Pizzano who had played in 13 games for Somerset.  A Boston native, Pizzano advanced to Triple-A with the Seattle Mariners who drafted him out of Columbia University, and also spent time at Double-A with the New York Mets earlier this season.  More on Pizzano in tonight’s game notes: 7-17-19 at SOM

Some roster moves today as the Revs have placed OF DJ Jenkins on the DL with what is believed to be a broken finger from a headfirst slide at second last night. Former Marlins OF prospect Zach Sullivan has been added as has RHP Sam Burton who will start tonight in place of Ian Thomas who is under the weather. More on Sullivan and Burton can be found in tonight’s game notes: 7-16-19 at SOM

Yup.  All of that, and probably more.  It’s been a busy couple of days news-wise for the Revs.  To sum it all up, a franchise record eight Revs have been selected to the Atlantic League All-Star Game this Wednesday night at PeoplesBank Park.  The full roster can be found here.  Yesterday also brought the announcement that J.P. Sportman was named Atlantic League Player of the Month; he would have been a ninth Revs All-Star, but had to be placed on the Disabled List after his 27-game hitting streak was ended with a hit by pitch on Tuesday, just 4 shy of the league record. Sportman is expect to miss 3-4 weeks. Melky Mesa has also gone on the DL, retroactive to June 24 (also due to a hit by pitch) and should return shortly after the All-Star Break.  In the meantime, the Revs have added former Yankees and Orioles lefty Cesar Cabral and have added speedy outfielder DJ Jenkins.  More can be found on those two in today’s game notes as the Revs aim for a record 9th straight win tonight in Lancaster: 7-6-19 at LAN